“I beat the socialist” Joe Biden told WLUK Wisconsin in September. “Look at my career — my whole career. I am not a socialist.” We know, Joe; the socialist would’ve won the general by twenty.

The Philly DSA Bulletin Team would first like to congratulate Joe Biden on his victory in last week’s Presidential election over bloated game show host Donald Trump. We would then like to draw your attention to this map: 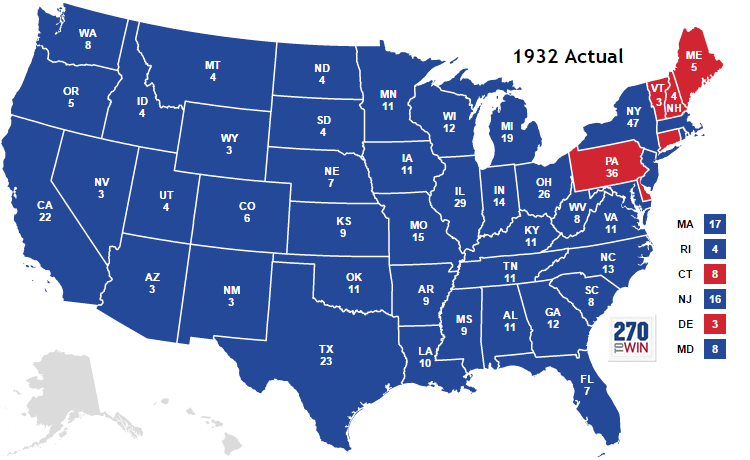 This is the electoral college map for the 1932 Presidential election between incumbent Herbert Hoover and Democratic challenger Franklin D. Roosevelt. That was the last time an incumbent faced such an uphill challenge in their reelection campaign. Unemployment was sky-high due to a collapse in the financial system that ground the world economy to a halt. People wanted change, and FDR promised it to them: relief for the unemployed, recovery of the economy, and reform of the system to prevent another crash. He won by twenty points, was reelected three more times, and has arguably been responsible, through the legacy of the New Deal, for every election Democrats have won since.

In 2020, incumbent Republican President Donald Trump faced a similar uphill battle. Unemployment is sky-high due to a pandemic that has basically ground the world economy to a halt. People want change. “Nothing will fundamentally change,” promised Joe Biden. Medicare for All is not on the table (“Single payer will not solve (this) at all”), and neither are any long-term reforms to the healthcare system.

We’re currently at something more or less like this: 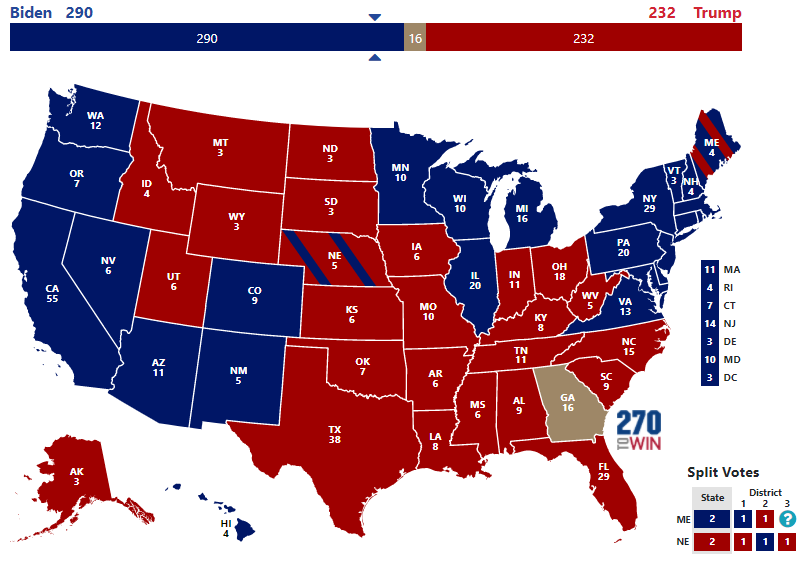 with a 50/48 Republican Senate, and it’s blindingly obvious why. The Democratic Party kneecapped the incredibly popular candidate whose main talking point was “free healthcare” and then wobbled through a general election that was closer than any polls predicted, blaming the left for dragging down a ticket that we more than likely buoyed up (given the impressive 75% win rate for downballot DSA candidates across the country).

“I beat the socialist” Joe Biden told WLUK Wisconsin in September. “Look at my career — my whole career. I am not a socialist.” We know, Joe; the socialist would’ve won the general by twenty. There’s cause for celebration after voting out Trump, but, as Metro DC’s Ben Davis wrote yesterday in The Guardian, this Biden coalition is weak, unstable, and almost certain to fall apart once Trump is off the ballot. “The only path forward for the left,” Davis concludes, “is one of confrontation with the Democratic establishment and a message of economic populism aimed at working-class voters of all races.”

So, once again, congrats, Joe. If you’re trying to raise the minimum wage or cancel student debt or something, we’re here for it.

Joining us as a guest speaker will be journalist and former Bernie Sanders speechwriter David Sirota! Mark your calendars for our third virtual general meeting.

Harassment and Grievance Process
In accordance with Article XIII of our Bylaws, a commission has been formed to receive, process, and review grievances for disciplinary action. To read more about the process or to file a grievance you can do so here.

PAID FOR BY PHILADELPHIA DEMOCRATIC SOCIALISTS OF AMERICA (WWW.PHILLYDSA.ORG.) NOT AUTHORIZED BY ANY CANDIDATE OR CANDIDATE'S COMMITTEE.