Who is Paul Prescod? 🤔 | Bulletin

You’ve probably heard a lot from us about Paul Prescod over the past few months. If you’re still not sure why his race is such a big deal, if you’re on the fence about getting involved, or if you’re just not sure how to talk to others about Paul, we hope this FAQ helps.

You’ve probably heard a lot from us about Paul Prescod over the past few months. If you’re still not sure why his race is such a big deal, if you’re on the fence about getting involved, or if you’re just not sure how to talk to others about Paul, we hope this FAQ helps.

Who is Paul Prescod?
Paul is a cadre DSA member, union organizer, and public school teacher. He’s running to take socialist priorities to Harrisburg, including:

Sending Paul to Harrisburg would grow the socialist bloc in the state legislature we need to pass bills that benefit the working class. Watch his latest video to hear more.

How does electing one person help our movement?
Each conversation we have at the door not only brings us closer to electing Paul — it’s also an opportunity to learn from community members, raise class consciousness, and bring working people to our mass movement. As socialists, we’re in a unique position to offer an answer to the interconnected struggles working people face every day: mass liberation from capitalism.

Why not his opponent?
Paul Prescod’s opponent is a two-decade incumbent whose tenure in the State Senate has been marked by inaction, incremental reform, and notable support for charter schools. He’s funded by GOP and establishment Dem-backer Jeffrey Yass. Yass is Pennsylvania’s richest person and the largest source of funding for GOP campaigns in PA.

Paul, on the other hand, has support from unions and progressive organizations in Philadelphia, including AFSCME DC 47 and 33, the Philadelphia Federation of Teachers, Teamsters Local 623, the Working Families Party, and Reclaim Philadelphia. He has received over 3,200 individual donations and has more than 200 volunteer canvassers. Paul’s campaign is fueled by and for Philadelphia’s working people, not wealthy GOP backers.

Why does it matter who sits in Harrisburg? How does that affect me?
There’s a big difference between politicians who hide out until election season and court high-dollar donors and those who organize year-round in their communities. Rep. Rick Krajewski ran a mutual aid operation that helped residents in his district safely access prescriptions and fresh food during the height of the pandemic. And Sen. Nikil Saval has stood on picket lines and used the bully pulpit to help workers win better conditions.

And after his tireless service as a union organizer, leading our own Labor Branch, and inspiring kids in the classroom, we believe Paul Prescod will do the same for the 8th State Senate district.

But first, we need to get him to Harrisburg. So this is it: the last bulletin with opportunities to canvass for Paul Prescod before the primary this Tuesday, May 17. If you haven’t gotten out on the doors yet, or if you need that last push to squeeze in another shift, now is the time to sign up.

We have FOUR FULL DAYS of canvassing left, plus Election Day! Sign up for a shift (or multiple) below!

If Paul unseats the 24-year incumbent, it will be the biggest upset in our city’s politics in decades. Let’s get out there and win this thing! 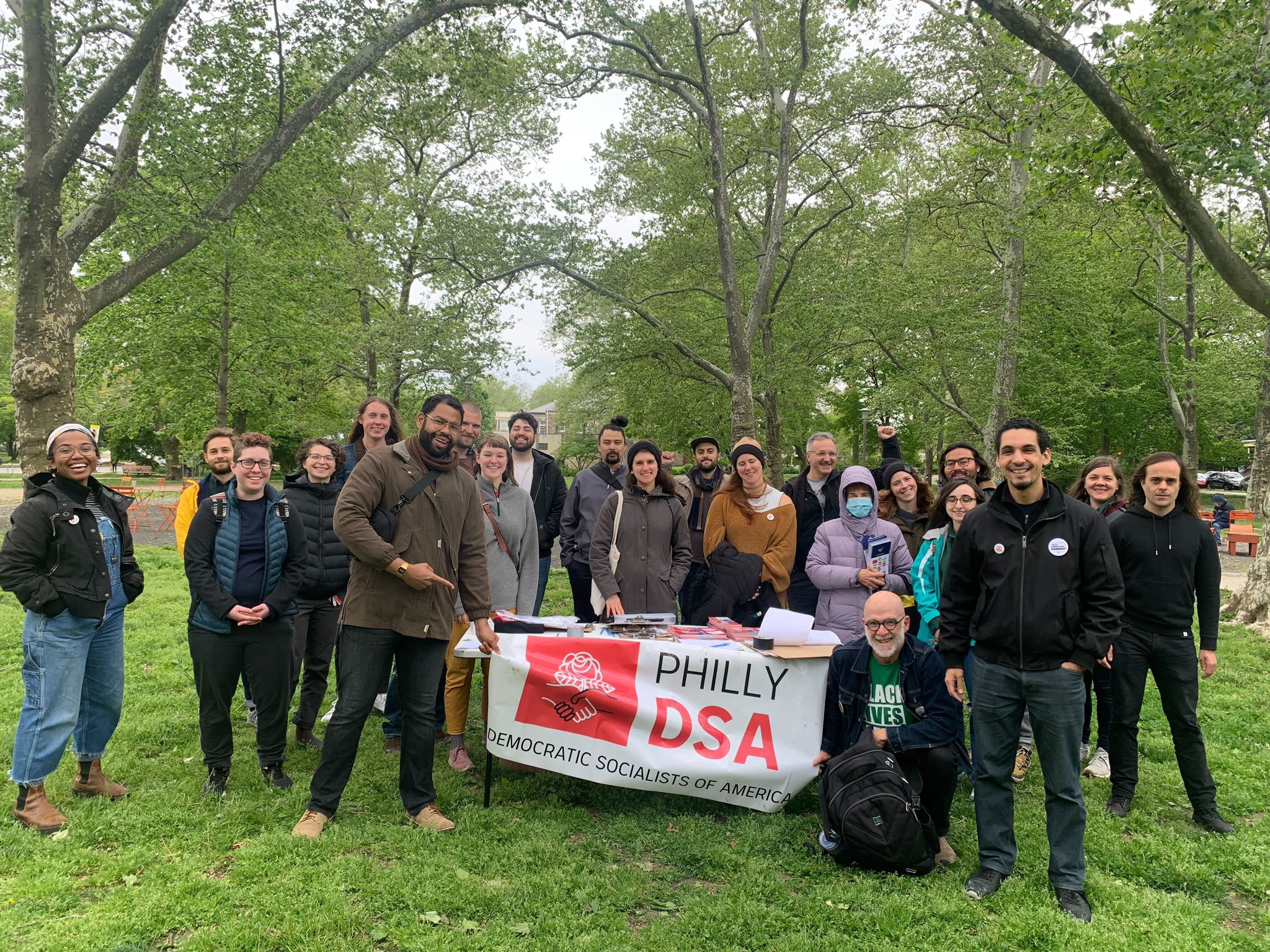 On the calendar
Unless otherwise specified, all events are held via Zoom.

Ben Fletcher Campaign Meeting, May 19 at 7pm
Join the campaign to install a mural commemorating Ben Fletcher and the legacy of interracial labor organizing in Philadelphia.

Poetry & Solidarity with the Racial Justice Committee, May 22 at 2pm, The Matchbook
Explore racial justice, multiracial community, and labor organizing through poetry! We’ll have an open mic, so bring an original poem or one of your favorites.

Communications Committee Meeting, May 23 at 6pm
Get involved in everything communications, including graphic design, writing, and social media.

Tax the Rich Committee Meeting, May 24 at 5pm
If you want to win the city services we deserve by making the rich pay their fair share in taxes, RSVP for our monthly meeting today!

Updates from the branches

Delco DSA General Meeting, May 18 at 7pm
Join fellow members to discuss campaigns and chapter business. All are welcome.

View all BuxMont events or all Delco events

This week in unions

To get involved: If you’re interested in supporting workers who want to organize, organizing your workplace, supporting workers and unions taking collective action, or in building relationships with rank and file union members and leaders, email [email protected].

“Democracy is indispensable to the working class, because only through the exercise of its democratic rights, in the struggle for democracy, can the proletariat become aware of its class interests and its historic task.” - Rosa Luxemburg